Ghana and Arsenal star Thomas Partey faces an early return from the African Cup of Nations after his side were eliminated on Tuesday in a shock defeat at the hands of the Comoros.

The Black Stars went into the final round of Group C fixtures needing a victory to stay in the competition following a loss to Morocco and a draw with Gabon.

But they struggled to bounce back from Andre Ayew’s early dismissal and were beaten 3-2 by the underdogs, despite overturning a two-goal deficit earlier in the game.

Comoros were expected to put up little resistance against the continental powerhouses in Tuesday’s decider.

The island nation are playing their first-ever AFCON in 2021, and in their first two outings were beaten by both Gabon and Morocco.

Nevertheless, it took them just four minutes to get on the scoresheet against Ghana through El Ben Nabouhane, provoking wild celebrations as they marked their maiden goal in an AFCON finals.

Ayew’s expulsion 25 minutes in raised the heat on the favourites, and Ahmed Mogni then struck in the second half to double Comoros’ advantage.

It looked for a while that Ghana would recover from those setbacks, as Richmond Boakye and Alexander Djiku netted to bring the game back to 2-2.

As Ghana pushed forward for the winner, though, they left gaping spaces behind, and Comoros punished them with Mogni’s third of the game in the 85th minute, finally ending the hopes of Milovan Rajevac’s charges.

Elsewhere in Group C, Gabon, without Pierre-Emerick Aubameyang and Mario Lemina after the pair were sent home, were pegged back by a late equaliser from Achraf Hakimi to draw 2-2 against Morocco, sending them back into second place behind the north African nation.

Comoros take third place and must now wait to see if they make the cut as one of the four who will advance to the next round, while Ghana finish rock-bottom of their group, missing out on the knockout stages for the first time in 16 years.

The Black Stars’ anguish, though, may prove a blessing for Arsenal.

The Gunners are set to benefit from the early return of Partey, having been forced to request postponement of their weekend derby against Tottenham due to a lack of available players.

AFCON 2022: Bring back the AFCON trophy or return the money we invested in you- Guinean President 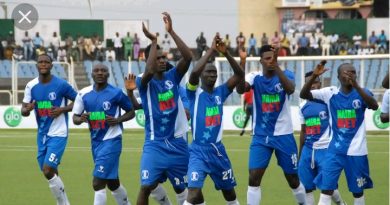