When the 2021/22 season of the Nigeria Professional Football League (NPFL) begins, football watchers would be seeing a descent display by the Shooting Stars Sports Club (3SC).

If the words of the Team Manager of the Oluyole Warriors, Oladimeji Lawal (MON), are anything to go by, the Ibadan soccer lords will not be found wanting in terms of good football artistry and positive results.

While speaking ahead of the start of the season next weekend, the former Golden Eaglets, Flying Eagles and Super Eagles diminutive winger, Dimeji Lawal said as regards the recruitment of players, 3SC has not done badly.

“I must let you know, some players have left and that is not least expected, that is a normal thing in football. At the end of the season, some players will go, no matter what you do to keep them.

“However, I can confidently tell you that, with the efforts of our technical crew and the support of the management, we have been able to recruit quality players, who would surely make our team strong and a delight to behold in the season.

“In our team now, we have some young and tested players. Some of them are coming from NPFL sides, while we were able to hook some quality players we noticed during our campaign in the NNL”.

“From the NNL, we recruited good legs like Aniete Uko from Vandtezzer, the second highest goal scorer in the NNL last season, Kola Daniel also from Vandrezzer, we have Bafan Augustine from Niger Tornadoes and few others”.

“With all these quality players teaming up with our old regulars, I can assure you that we will compete for the league title”, stated Kabongo, as the 3SC team manager is popularly known.

He hinted that the club was not lacking in terms of support from the Engineer Seyi Makinde led government, adding that the Oluyole Warriors were fully motivated for the matchday one trip to Gombe where the team will confront host Gombe United next Saturday. 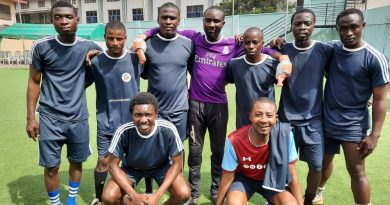