… To Commence Drilling of Borehole on Thursday

The Executive Chairman of Ido Local Government, Hon Sheriff Aderemi Adeojo has flagged-off the grading of roads across some wards in the council area.

Hon Sheriff who performed the flag-off ceremony said his administration has stepped up action on its determination towards ensuring good road network in the council.

While speaking with National Daily NEWS, the performing chairman stated that he embarked on this project to maintain the objectives of the present administration of Governor Seyi Makinde on rural infrastructural development programme.

He assured the residents that his administration in Ido Local Government would leave no stone unturned in ensuring no ward is marginalized in the road network which according to him is very dear and complimentary to the state government’s infrastructural drive.

“We are aware that most agricultural produce comes from the rural areas, hence this makes it necessary for good accessible road, for the transportation of the products to the markets as this effort would in no small measure add values to the people of my local government.”

The grading of the road started at Akufo in ward 2, Ilaju-Akinsola, ward 1, Akinware, ward 3 and Bataki-Idi Iya, ward 5.

Their goodwill messages, residents of the communities that will benefit from the road grading appreciated the council boss for his timely intervention which they said will aid the development of the communities. 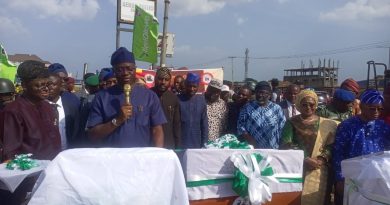