The Southwest zone of Youth Sports Federation of Nigeria (YSFON) has commenced its maiden Under-16 Gold Cup Soccer Tournament tagged Ode Omu 2022 that had the six states within the southwest geo-political zone in attendance with a pledge by the organiser to make it an annual event.

Ogun State team defeated the host State (Osun) by two goals to nil in the opening match that was watched by the representatives of the traditional ruler of the Ode-Omu, Osun State, HRM Oba James Bolarinwa Oladipupo Ajani, the Alayegun of Ode-Omu, Chief Adeyemi Rufus, Chief Adigun Funminiyi and Ojewale Ajiboye,

Also in attendance was the National President of Ode Omu Development Union, (ODU) Mr. Olaniyi Akinlabi and the national treasurer of the union Mr. Bayo Adeyinka. The Chairman of Southwest chapter of YSFON, Rafiu Abayomi Alabi who initiated the competition in his address said the competition is part of activities initiated by the southwest zone to celebrate the 57 years anniversary of YSFON.

“The idea behind this U-16 Soccer event is use it to positively engage the youths in the Yoruba speaking States and also use it to scout for talents that can easily inject into the national Under-17”, Alabi popularly known as Oluaye who was represented by Kenny Adeyemi noted.

Akinlabi, the ODU president in his address welcomed all the participants from the six States to Ode Omu, while assuring them of their safety and pledging full support of all sons and daughters of the town to the organizer.

“We are happy to host this prestigious event and that is why I want to thank the executives of YSFON for considering Ode Omu as the venue for this tournament. We are going to do our bit in ensuring this tournament becomes an annual event here”, said the ODU president. 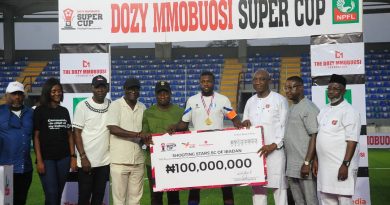