Gunmen suspected to be Fulani militias have killed twelve persons and injured twenty-eight others at Chando Zerreci community of  Bassa Local Government Area of Plateau State.

It would be recalled that the Irigwe land in the local government has been under attack by gunmen for quite some time.

No fewer than ten people were killed last week and farmlands and crops worth millions of naira were destroyed.

A member of the community Micheal Danjuma who escaped the attack by the whisker disclosed that the gunmen who were in large number attacked the community on Saturday at about 11:45 pm adding that ten people were initially killed while another two were also killed where the people were observing their annual festival.

According to him, “12 people were gunned down instantly while 28 others sustained a gunshot wound and now receiving treatments at various hospitals in Jos.

The Irigwe Development Association (IDA) in a statement signed by its Publicity Secretary, Mr. Davidson Mallison confirmed the incident adding that the attack was carried out by the Fulani militia.

“Apart from this “Early this morning Sunday they also attacked our people at Ritivo while observing the traditional and cultural festival and two persons have been confirmed killed with others wounded as a result of bullet injury.

“In total,12 people have been killed while about 28 people have sustained varying degrees of injuries. At the time of compiling this report, searching for victims is still on, that is to say, the report can be updated in case of any incoming information,” it disclosed.

It added that the attack was a coordinated one executed by the marauders as they targeted spots where the Rigwe people usually observed their cultural ritual.

Speaking with Tribune Online, the National President of IDA, Prince Robert Ashi who strongly condemned the persistent attacks on the Irgwes’ said both the government and the security agencies have a responsibility to fish out the perpetrators of the incident.

Prince Ashi who said the attack on the Irigwe is becoming too rampant and unacceptable said it was a case of a deliberate plan to annihilate the Irigwe to take over their land.

When contacted the State Police Public Relations Officer ASP Ubah Gabriel Ogaba confirmed the attack adding that men of the Command have been deployed to the affected community.

In spite of the huge investment in the water sector by the government and international organisations, water scarcity has grown to become a perennial nightmare for residents of Abeokuta, the Ogun State capital. This report x-rays the lives and experiences of residents in getting clean, potable and affordable water amidst the surge of COVID-19 cases in the state… Gunmen kill 12  Gunmen kill 12

The Lagos-Ibadan railway was inaugurated recently for a full paid operation by the Nigerian Railway Corporation after about a year of free test-run. Our reporter joined the train to and fro Lagos from Ibadan and tells his experience in this report… Gunmen kill 12   Gunmen kill 12 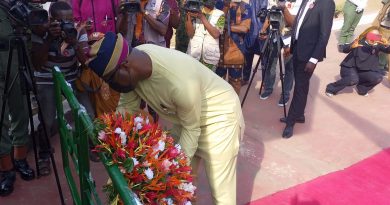