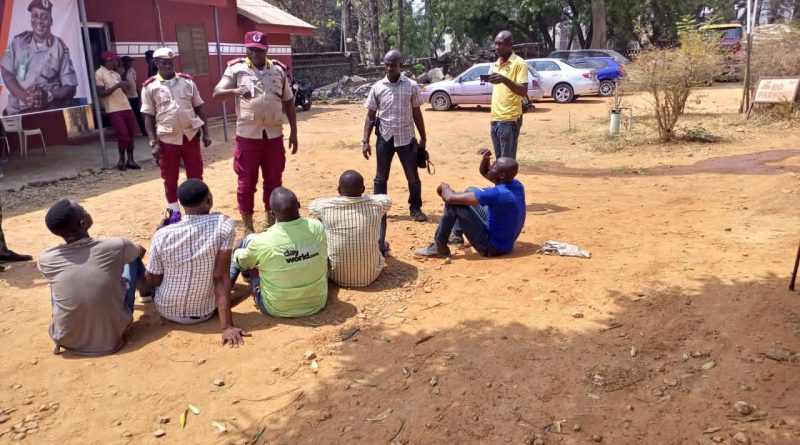 ……As OYRTMA stripes out Orita challenge and New garage command

The Oyo State Road Transport Management Authority (OYRTMA), on Thursday arrested no fewer than five impostors who have been parading themselves as traffic officials.

Parading the impostors at the agency’s administrative headquarters, the Chairman of the agency, Mogaji Akin Fagbemi, noted that the suspects were arrested around  New Garage, Orita ChallengeFagbemi, said the victims alleged that the arrested officers always accompany them to ATM points to obtain some specific amounts from them.

His words: “We have been informed by the public that there are some agents that call themselves OYRTMA officers in some areas in Ibadan and what they do is to apprehend those who they come across violating traffic rules. They collect cash and do all sorts of things with them, ranging from ceasing their vehicles, taking their belongings, and all that. That is inimical to the operation of OYRTMA.”

“His Excellency, Governor Makinde is a man that likes to follow the rule of law and that is what we also stand for here. There are people that violate traffic rules, we are not supporting that but at the same time, individuals cannot constitute themselves as the law as there are procedures.”

“We have received a lot of complaints around New Garage and Orita Challenge people are still complaining. At times, victims said the impersonators follow them to the ATMs to collect  N20,000 to N25000.

“I will also want to plead with the citizens to obey traffic regulations because a lot of our people disobey traffic rules and park wrongly and these miscreants tend to take advantage of that to exploit offenders.”

“For those that have been arrested, we will follow the rule of law by charging them to court and the law will take its course. For us, we will become more vigilant. We have set up a series of operational procedures that will assist in ensuring that such an occurrence will not be repeated.”

“I also want to urge members of the public to keep basic rules and not fall into the hands of these miscreants because when you park wrongly, you attract them and I think we should be able to follow with that. By the time we are able to get more hands working with us, it will assist to curb the menace we are seeing today.”

On his part, the General Manager of the agency, Adeoye Ayoade, stressed that OYRTMA officers are not authorized to collect cash publicly but rather ask erring public members who have run foul of the law to go pay into a dedicated bank account created by the state government.

According to him: “For some weeks now, there have been a lot of complaints from the public that some officials of OYRTMA are collecting money from innocent public. And as far as OYRTMA is concerned, we just want to clarify that you cannot see any of our officers collecting cash publicly, we rather ask erring public members, who have run foul of the law, to go pay into a dedicated bank account created by the government.”

“We thank God that we have arrested them now and we will still be on the lookout so that we will arrest the rest of them who are in the same act. As a result of this, we want to alert members of the public that if anyone, in the name of OYRTMA, requests for anything, please alert us and we will deal with the situation.”

“We are not in any way victimizing anyone or arresting innocent residents unduly. This is also a warning to the miscreants using the name of OYRTMA to extort members of the public.”

“As they are leaving this place, we are taking them to the Police for further investigation.”