The Economic and Financial Crimes Commission (EFCC) has arraigned the Speaker of the Ondo State House of Assembly, Mr. Bamidele Oleyelogun, in court over financial impropriety.

Oleyelogun is reportedly in court at present time.

Public Relations Officer of the correctional centre, Mr. Ogundare Babatunde, when contacted on phone corroborated the Squadron Commander, insisting that no journalists would be allowed into the court.

Oleyelogun and some members and officials of the Assembly were alleged by Hon. Iroju Ogundeji, the deputy speaker of the Assembly who was controversially removed, of collecting and sharing some money for a seminar in Lagos which they never attended.

Ogundeji had written EFCC to investigate the fund allegedly collected and shared by the speaker and others for a phoney seminar in Lagos.

But operatives of the Olokuta Correctional Centre prevented journalists who were on ground to cover the court proceedings from gaining entry into the court.

A Squadron Commander, who manned the entry point, insisted that journalists could not be allowed in because there was an order from Abuja that all correctional centres should be on red alert to prevent jailbreak. 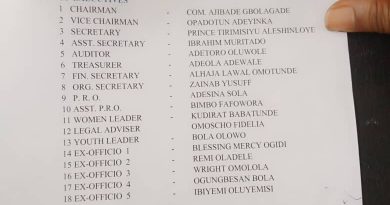