Oyo State Governor, ‘Seyi Makinde, said, on Saturday, that the state government will support the Government College Ibadan and other schools in the state to achieve their fullest educational potential.
The governor stated that looking at the way policies and policy implementation of his administration in the education sector have improved educational standards, it was only a matter of time before the state becomes the first in the education sector.
A statement by the Chief Press Secretary to the governor, Mr. Taiwo Adisa, indicated that the governor stated these at the Government College Ibadan, where he commissioned several projects facilitated by old students of the institution.
According to Governor Makinde, once the state is able to surmount the two major challenges facing the education sector, including the quality of the teaching staff and the need for parents to take major responsibility in training their children, then Oyo State would take its pride of place as the best in education across the country.
Governor Makinde commissioned the GCI Main Road reconstructed by Mr. Bolanle Babalakin, SAN, the renovated Powell House Hostel; Carr House Hostel; the GCI Health and Wellness Hub; a Lecture Theatre and the GCI Museum.
Speaking shortly after commissioning the projects, the governor maintained that the GCI Ibadan has become a massive construction site as a result of the interventions of the Government College Ibadan Old Boys Association (GCIOBA).
He said: “The main issue I can see here today is that this is almost like a massive construction site. You see one project or the other going on everywhere here, being championed by the Old Students Association of the Government College, Ibadan.
“I think most of us have one or two things to learn and, from the result that you can see, as a government, we will support them to the fullest extent possible.
“I want to assure that they will get whatever they need from the government.”
The governor, who was commended by the GCIOBA for his administration’s support to the institution, especially in the area of teachers’ posting, equally maintained that his administration will continue to explore all avenues for the improvement of the education sector.
“In the education sector, you will always have challenges no matter how good the system is. But there will always be room for improvement.
“We have challenges with the teachers, the quality of teachers and also getting parents to know that the government will try but they have the primary responsibility to train their children.
“So we have to do more in those areas and once those areas can complement what we are doing, I think Oyo State is well on its way to becoming the first educationally,” the governor added. 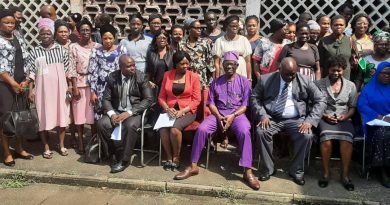